Scientists have successfully used sunlight and well-designed catalysts to split water into hydrogen and oxygen, and they did this with maximum efficiency, which means that the process has almost no losses and unwanted side effects. The latest breakthrough in solar hydrogen production makes scalable, economically feasible hydrogen production more likely to be achieved, paving the way for humans to switch to clean energy.

Pour yourself a glass of water and take a look. Water is rich in fuel-hydrogen. Unlike petroleum-based energy products, hydrogen is clean when burned and only produces water. Sounds incredibly good?

The use of catalysts and sunlight to split water, called photocatalysis, has been a promising method of hydrogen production from solar energy for decades. However, most previous attempts have produced less than 50% external quantum efficiency, which represents the difficulty of designing efficient catalysts for the real world. The catalyst needs to be better designed so that every photon absorbed from the light source can be used to make hydrogen. The key to improving efficiency is to rationally configure catalysts and prevent defects in semiconductors. Here, Japanese scientists demonstrated that using modified aluminum-doped strontium titanate (SrTiO3:Al), at wavelengths between 350 and 360 nanometers, the external quantum efficiency of total water decomposition is as high as 96%, which is equivalent to the internal quantum The efficiency almost reached 1. 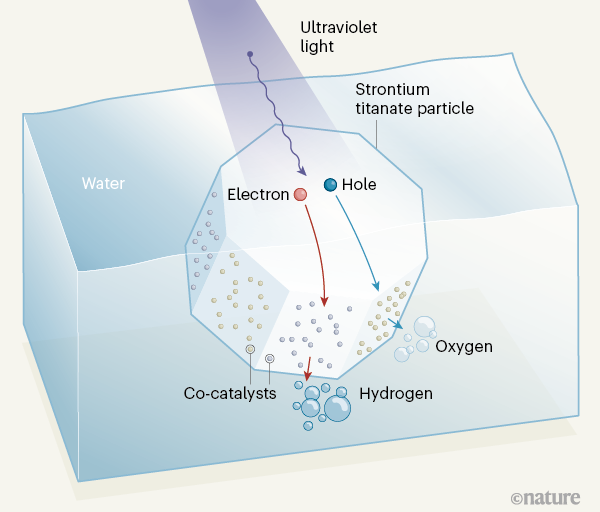 Photocatalytic particles designed for photolysis. The particles of the light-activated catalyst (photocatalyst) can be used to promote the decomposition of water and break down water molecules into hydrogen and oxygen.

This paper was published by Tsuyoshi Takata and others from Shinshu University in Japan on May 27. They used aluminum-doped strontium titanate as a photocatalyst to break through the new frontier of power production. Its performance has been extensively studied, so it is currently the best. They chose to use rhodium as a co-catalyst for hydrogen and chromium oxide, and cobalt oxide as a co-catalyst for oxygen. By fine-tuning them, they only participated in the desired reactions. This method makes the reaction without reorganization loss.

These new discoveries have opened the door to scalable, economically viable solar hydrogen production. Their design strategy successfully reduced defects and brought the process efficiency to near perfection, and the knowledge gained will be applied to other materials with strong visible light absorption. Before we can drive cars with hydrogen, we still need to do more work, because this study focuses on the use of ultraviolet light, and the large amount of visible light from the sun is still not fully utilized. However, this great breakthrough made this possibility no longer unreachable, and in theory, it was just a matter of time. It is hoped that it will encourage scientists, researchers and engineers to participate in this field and further promote the development of solar hydrogen production.

Intelligent Hydraulic umbrella drill is an intelligent hydraulic equipment that can drill blast holes used in the construction of shafts by drilling and blasting. The equipment has three independent working arms. According to actual construction conditions, the whole machine can adopt integral type or split type drilling for construction.