In general, the failure of mechanical parts in the service process is quite complicated, involving design structural problems, selected steel grades, metallurgical quality of steel, heating of steel parts, forging, heat treatment process and process parameters, and parts. In many aspects, such as service conditions (working conditions), these factors are often linked and restricted. They are often intertwined with various factors, and sometimes they appear confusing from the appearance. Although it is recognized that many part failures are caused by fatigue and/or impact, there is a lack of understanding of the mechanism of action that causes fatigue or impact. 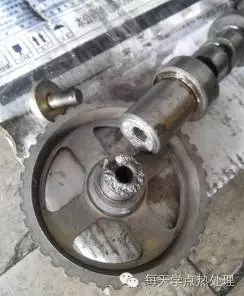 Taking auto parts as an example, if the failure occurs under various conditions (road, season, etc.) for the failure of the same form, it can be attributed to the design reason; if the failure mode is only bad in the mountainous area The occurrence of sand and wood on the road surface can be attributed to the harsh conditions of service. In either case, the manufacturer (division) should analyze the cause and prevent it. However, it is not easy to find out the real cause of failure. Here are some examples of failures based on heat treatment defects.

The steel spline shafts forged, annealed and quenched and tempered are analyzed for torsional fatigue fractures at a spline of 40 mm straight:

Of course, it is conceivable to reduce the tempering temperature to ensure the hardness, but for SCr4H steel or SCM4H steel of about 1% Cr, tempering at 400 Â° C or less is insufficient. If it can be proved that the spline shaft after tempering below 400 Â°C can maintain the hardness above 40HRC, and the actual walking test does not break, then the tempering temperature is not enough.
Conclusion: For the straight 40mm round bar, due to the insufficient hardenability of SCr4H steel, the SCM4H steel with better hardenability than SCr4H steel is mainly studied. When SCM4H steel is used, the quenching hardness of the surface and center of the round bar is 46-57HRC and 39-55HRC respectively, and the surface hardness is mostly above 48HRC. Therefore, it is decided to use SCM4H steel to manufacture the spline shaft, and the design requirements should be quenched back. The hardness after fire is specified to be 40HRC or more.

For failure analysis of parts made of S55C steel and broken during long-term service: the workpiece is forged and tempered after forging, and the hardness is about 20HRC. It is a fatigue fracture caused by bending. Observation by microscopic observation revealed that there was a considerable decarburization phenomenon near the starting point of the fracture.

The crankshafts of the early small-sized automobile engines were all made of SCr4, and subjected to forging and annealing, and then subjected to overall quenching and tempering, and the surface hardness was set to 40 HRC. The crankshaft made according to this scheme has a fracture phenomenon during the service process. It is found through the fracture analysis that the fracture source is near the corner, and the hardness near the fracture source is about 35HRC, which is lower than the specified value. The fracture is mainly caused by bending. Fracture.

One of the preventive and corrective measures is to use high frequency quenching without changing the shape, size and steel type of the crankshaft. There are two methods for pretreatment: one is forging, normalizing, quenching and tempering, the surface hardness is 38HRC; the second is forging, normalizing, and the surface hardness is 18HRC. The crankshafts of the above two pre-treatment states were subjected to the same high-frequency quenching and installed for 10 h bench test, and then loaded for driving test. The former did not break, while the latter broke from the edge of the high-frequency quench hardened layer. The topography is a fatigue fracture based on bending.

In general, when the crankshaft made of chrome-molybdenum alloy steel adopts the first pretreatment scheme, the hardness and depth of the hardened layer are superior to the second scheme, and the defect is to increase a quenching and tempering process. When the second option is adopted, if the shape and size of the crankshaft can be changed, it is also guaranteed that no breakage occurs, but actually changing the shape and size of the crankshaft is not an easy task. Therefore, as a heat treatment, it is necessary to consider a method on the heating coil. If the rounded corner can be hardened, the fracture may be avoided. For example, large engine crankshafts with different shapes and sizes are typically made of SC45C (45#) steel. The hot working process is forging, normalizing, and induction hardening. There are many examples of the crankshaft manufactured by this method that does not break during use.

Conclusion: For the crankshaft of small automobile engines, in order to prevent the occurrence of fracture, it is decided to switch to SCM4 steel with better hardenability. The hot working process is forging, normalizing, and conventional quenching and tempering, and the surface hardness is controlled at about 42HRC. The crankshaft in this state is rarely broken.

The knuckle kingpin made of SCr22 steel is analyzed during the use of the broken parts: the production process of the main pin is forging, annealing, cutting, carburizing, quenching and tempering. As mentioned earlier, the cause of the failure is complex and cannot be generalized. Microstructure observation of the carburized layer of the main pin shows many reticulated carbides with a hardness of only 15 HRC. The problem of banded ferrite in the uncarburized portion cannot be simply regarded as a heat treatment defect.

The fracture failure of the differential planetary gear made of SCr22 steel is analyzed: the gear production process is forging, annealing, cutting, carburizing, quenching and tempering. The steel used has a carbon content of 0.25%, which is slightly higher than the specified value. More granular carbides can be seen in the carburized layer. The hardness of the carburized layer is 60-62HRC, and the depth is 1.40mm, which is slightly deeper. In addition, most of the cracks in the layer are formed along the grain boundaries. The core of the root is harder. It is 37HRC. From this, it can be concluded that the cause of the fracture is over-carburization, and because the quenching temperature is low, the entire gear is weak and the strength is low.

Metallographic observation shows the crack morphology at the junction of the carburized layer and the uncarburized portion. It is generally believed that the crack is formed at the interface of the hardened layer and the core, spreads parallel to the surface of the layer at the interface, and finally the vertical surface peels off. As a rule of thumb, this damage is likely to occur when the hardness of the uncarburized portion is low. The surface hardness of the infiltrated layer is generally above 60HRC. If the hardness at the intersection of the gear root circle and the gear center line is defined as the core hardness, according to experience, the core hardness of the car transmission gear will not be damaged when it is 30 to 35HRC; Conversely, abnormal damage is likely to occur above or below this range. However, gears with low and high hardness have different fracture profiles. The hardness of the truck gear is preferably higher. Of course, the failure gear analyzed here is made of nickel-containing SNC21 steel. However, if the hardness of the gear core is 30 to 35 HRC, it is rarely broken even if it is made of SCr22 steel or SCM22 steel.

Of course, for some gears, even if the core hardness is not in the range of 30 to 35 HRC, it does not necessarily cause damage during use. This fact indicates that not all gear core hardness should be specified in this range. For some gears that are less demanding and have a harsh working condition, the core hardness has little effect on the breaking strength.